Learning From The Best! 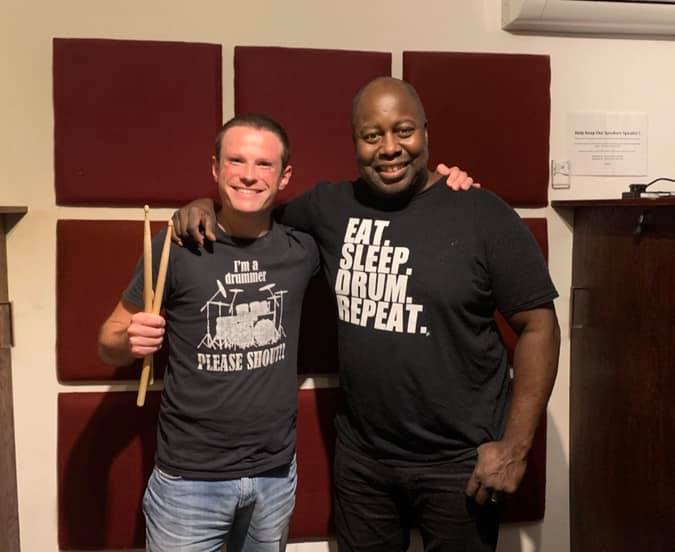 They always say that meeting your inspirations are amongst some of the greatest and memorable moments of your life. In Joe’s case, this description doesn’t even begin to come close to the huge smile on his face after a masterful session with one of the finest freelance drummers and sessions musicians in the music industry…

Ralph Rolle is best known as the drummer for Nile Rodgers and Chic and his performance list also includes the likes of Sting, Bono, Elvis Costello and Dolly Parton just to name a few. He is in incredible demand as a musician but Joe was lucky enough to have been given some of his time to make a huge ambition become a reality.

On Wednesday 15th September Joe flew into Manchester, U.K. to meet Ralph at Blueprint Studios, where bands and artists such as Elbow and Anna McLuckie regularly rehearse. He and Ralph worked closely together throughout the time they spent in the studio. Ralph demonstrated to Joe many new and different ways of approaching the drums and worked through some advanced technical skills, which only added to Joe’s already extensive knowledge of the instrument.

Joe was, understandably, extremely enthusiastic and excited during this hugely special opportunity, with his positivity and exceptional attitude being a particular thing Ralph picked up on. The pair both demonstrated their exceptional abilities as drummers throughout the session, with Ralph clearly demonstrating why he is regarded as one of the finest sessions musicians in the world. Ralph later praised Joe’s ability with a post on his Facebook site, stating:

“The young man in this picture (now 21) met me when he was 14. He flew from France to Manchester to take a lesson with me. We spent a magical hour together. Half playing…half talking. He told me, ‘You’ve been a role model and inspiration for me from the first time I saw you play at my school’. Thank you, Joe, for coming and playing so well and asking some of the very important questions that you asked. I am sure you’re going to do great things, as you are already doing. Keep up the great work. Hope to see you again.”

“It was an absolutely incredible experience and a true privilege to spend time in the studios with Ralph Rolle yesterday. Ralph, of course, is best known as the drummer for Nile Rodgers and Chic. Learning from Ralph will always be one of the best memories I will ever recall to anybody I meet. He is one of the finest freelance and sessions drummers in the world and this for me has been a truly life changing experience to say the least! Thank you so much Ralph.”